17 fun facts: The Texas Longhorn Cattle Breed and its history 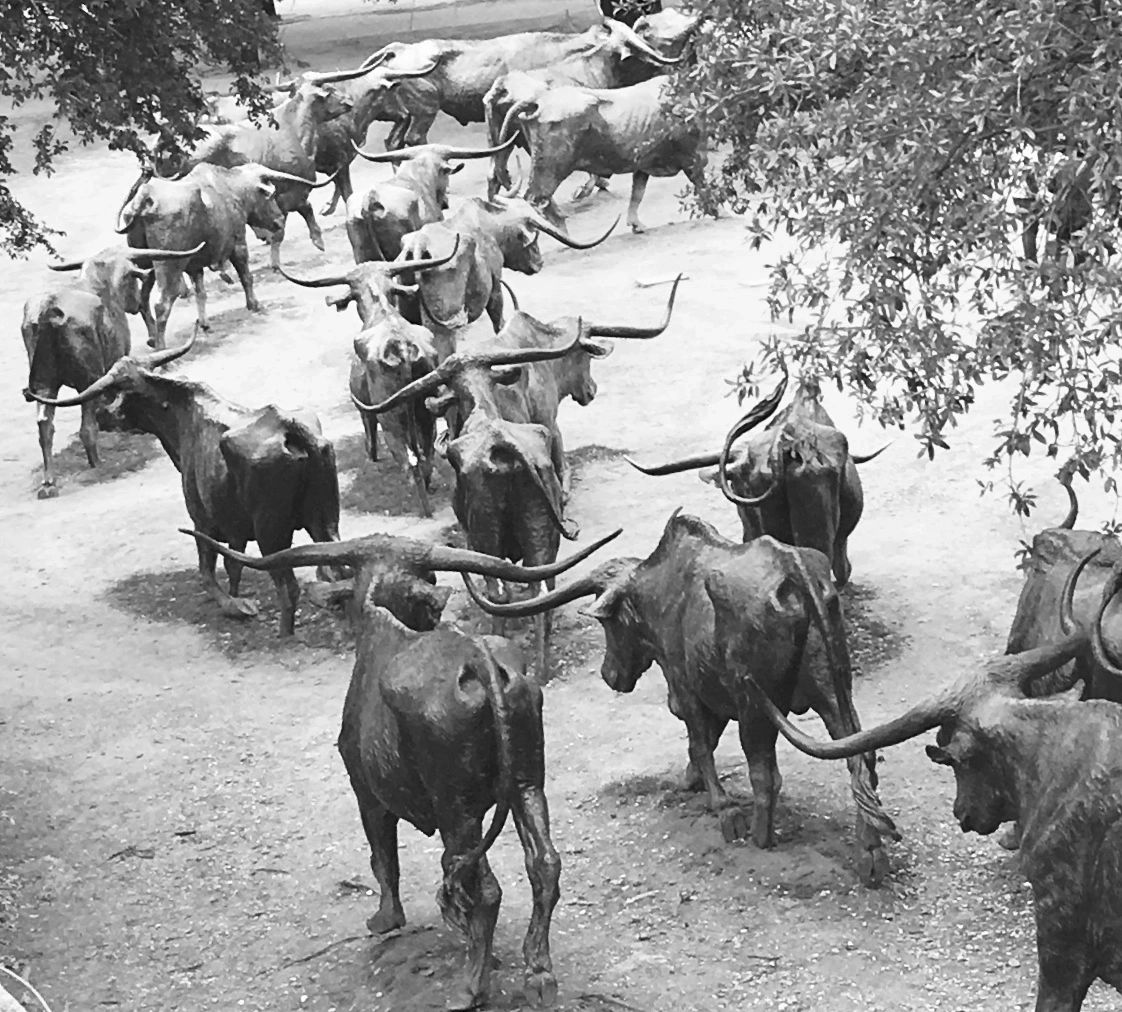 Like all awesome stories, the history of the Texas Longhorn Cattle Breed has many twists and turns. A quick computer search will reveal tons of information. However, there are 17 astonishingly interesting facts that are fun and that stand out and are highlighted here.

Fact 1. Texas Longhorn Cattle did not originate in Texas
LOL!! None-the-less longhorn cattle are synonymous with the state. READ ON if this makes no sense …..

Fact 2. Texas Longhorn Cattle have a link with Christopher Columbus.
On his second voyage to the New World (1493), Columbus brought cattle with him from the Canary Islands. A study conducted in 2013 by the University of Texas in Austin, connected the cattle genetically as progenitors of Texas Longhorn cattle. SEE Full article here

Over Centuries, Spanish settlers and missionaries drove these ancestral Longhorn cattle herds north, over Mexican lands towards what we now call Texas.

Fact 3. There was a time when Texas Longhorn Cattle were feral.
Because the Spaniards believed in open range feeding many cattle escaped, were left behind on their travels or just wandered off. In the days predating barbed wire fences, these cattle also intermingled with other bovine breeds brought to the continent. Cattle interbred, became wild and left to their own devices underwent a process of Natural Selection. Only the strongest survived.

Fact 4. It is estimated that around the 1860’s, 5 to 6 million cattle roamed wild in Texas.
Wild Texas cattle were predominantly unbranded and self sufficient.

Fact 5. Fun Fact | “Maverick“- originally was in reference to unbranded cattle.
The word Maverick means an independently minded person. Samuel A. Maverick (1803-1870) was a Texas land baron and cattle owner who refused to brand his cattle. In the mid 1800’s, a calf or yearling without a brand became known as a Maverick. For more on branding read our article;

Fact 6. In the early 1800’s Texas Longhorn Cattle were trailed to New Orleans and California for their hides and tallow.
During these drives, Texas Longhorn Cattle developed an immunity to Tick Fever, which they in turn passed on to other breeds of cattle they came into contact with. Many states placed restrictions against their passage and it became more difficult to get the wild Texas cattle to market. The era of the great cattle trails began in earnest after cow towns were established at rail heads outside of Texas, as a point of departure to ship cattle to markets outside of Texas.

Fact 7. Many Civil War soldiers who returned to a war impoverished Texas State turned to Texas Longhorn Cattle to earn a living.
These war veterans rounded up unmarked cattle, branded them and claimed them as their own. The longhorn cattle drives that ensued help revive the State’s economy and became the fuel for the legendary cowboy and the trails that they pursued.

Fact 8. Charles Goodnight was a trail blazer, literally!
Sometimes known as the ‘father of the panhandle’, Charles Goodnight was one of the best known ranchers in Texas. He created a path together with Oliver Loving along the Pecos River, to Colorado. The Goodnight/Loving trail was heavily used even though it was a long way round but it was the safest route in that direction.

Fact 9. The Chisholm Trail was another major route for livestock out of Texas.
Between 1867-1884 (less than twenty years), over 5 million and up to 10 million longhorn cattle are estimated to have been driven to the rail heads in Abilene, Kansas, on their way East.

Fact 10. The Texas Longhorn cattle drives spawned the cowboy culture.
Cattlemen in Texas worked closely with Vaquero’s who were accustomed to trailing large groups of cattle. Their influence is woven into the cowboy culture regarding the techniques of handling cattle, their equipment as well as their clothing.

Fact 12. The Federal government commissioned the establishment of a foundation herd of Texas Longhorn cattle in order to preserve the breed.
J. Hatton and W. C. Barns, two US Forest Service employees rounded up 19 cows and a bull over a seven year period. This longhorn herd, known as the Wichita Mountains Wildlife Refuge herd, became the foundation for the government maintained WR herd, as we know it today. From 1927, records of each animal were kept and since 1934 to the present day, an annual auction sale of these historic longhorn cattle is held.

Fact 13. Six additional families are recognized for contributing to the maintenance of the Longhorn Breed.
These ranchers bred Longhorn cattle in their purest form when other farmers did not. The bloodlines they perpetuated influenced and provided the foundation for the Longhorn breed as we known it today.

Fact 15. The Texas Longhorn Breeders Association of America (TLBAA) was established in 1964 by Charlie Schreiner III
The mission of the TLBAA as stated on the website is ” To record, promote, and protect the legacy and distinct characteristics of the Texas Longhorn while ensuring its purity and posterity. ”

Fact 16.The Cattlemen’s Texas Longhorn Registry (CTLR)
The CTLR is a small group of Breeders who believe that modern day improvements to Texas Longhorn Cattle are compromising the integrity of the Texas Longhorn cattle breed.

Fact 17.
The Texas Longhorn Cattle has changed considerably over the last 100 years. So much so, we recently wrote an article highlighting those changes.

100 years of Texas history with Texas longhorn Cattle in Texas

Question:
If you have noticed changes in how the Texas Longhorn Cattle breed has evolved, we would be interested to read your comments . Do you think changes to the breed are beneficial or do you see these as a set back? Write to us at Cathy@GVRlonghorns.com

*Photo Credit: Thank you to our friends, Mark and Sam, who took these beautiful photo’s at Pioneer Plaza, Dallas TX.

Pioneer Plaza is situated in in the Convention Center District in Dallas, Texas. It features an over -sized bronze sculpture of Texas Longhorn cattle on a cattle drive. Artist: Robert Summers.

Disclaimer: All material noted above is based on our hands- on experience as ranchers, our own research and our observations of our own cattle over the years. We have done and continue to do extensive research in order to maintain our herd‘s optimum health. However, all opinions and statements made on our website are meant as guidelines only. We are not qualified veterinarians or in this instance, qualified historians, and urge you to consult a specialist with your concerns.

Content of this blog belongs to GVR Longhorns LLC and may not be copied in any form. ©GVRlonghorns.com All rights reserved.

Please contact us at Cathy@GVRlonghorns.com with any concerns, corrections or comments with regard to our blog.