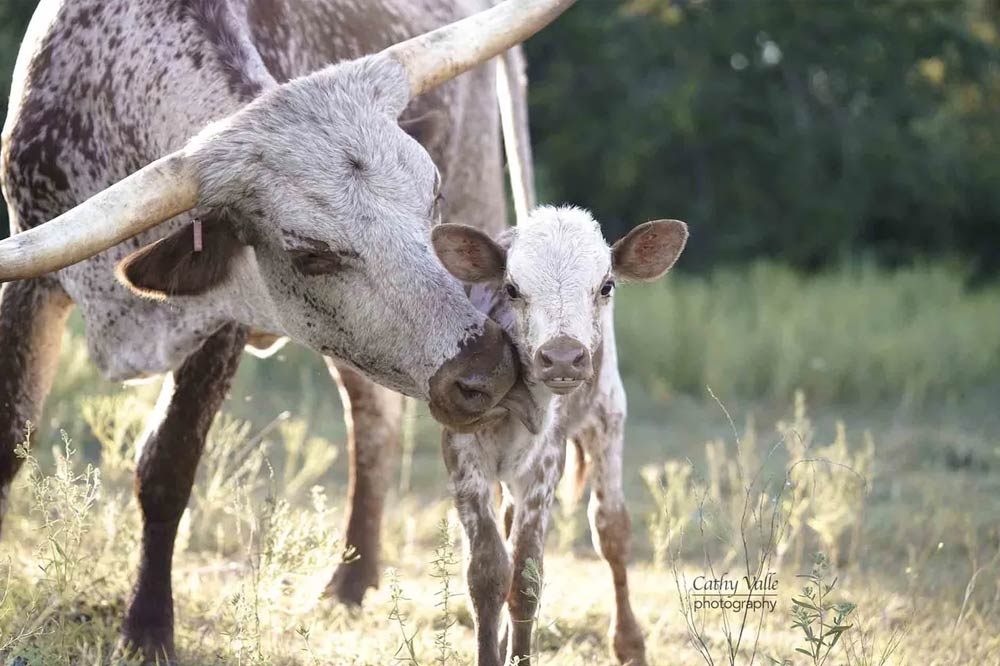 Romance and Ruminating with Longhorn Cattle

It’s not often you will hear LOVE and LONGHORNS in the same sentence.

WHY then would we venture into this ‘field’, so to speak, on St. Valentine’s Day, the most romantic day of the year? 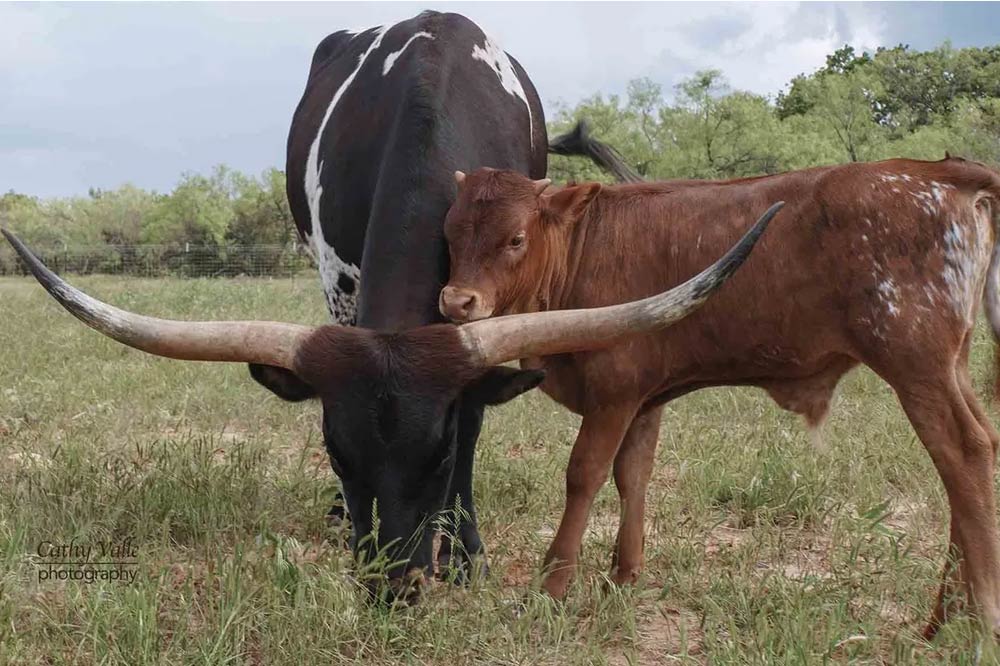 According to Statista.com, Americans are likely to spend around $24 Billion on St. Valentines Day in 2022.

CNBC published an article on Feb 6 2022 with the title “How much Americans are planning to spend on Valentine’s Day” by Mike Winters. Referencing a couple of surveys….

Humans are complex but this sounds awfully complicated. So, in an attempt to make sense of romance in an unconventional way, we reflect on the seemingly unsophisticated behaviors of our Texas longhorn ruminants.

Cattle have a herd mentality. Our Texas longhorn cattle appreciate the company of each other. Some of them actually like each other and then there are others that are the best of friends.  For us humans, Covid has accentuated how monotonous our own company can get. Whether one refers to friends, family, a partner or a child, relishing the presence of others, even if they drive us crazy, is what loving and loving life is about. 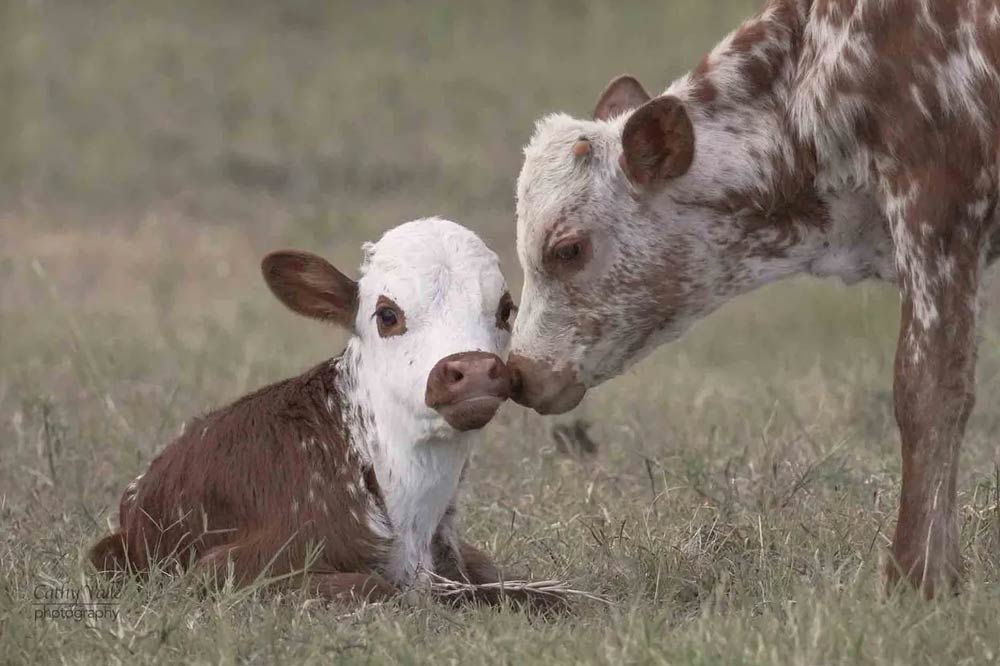 In our longhorn herd, our cattle go about their business of life together. With water and the correct nourishment, they live their lives happily side by side and stress free.

2. “Every heart sings a song incomplete until another heart whispers back”

Texas longhorn cows have a purpose in life. Their purpose is to have a calf. As simple as that may seem, we believe that as long as a cow has a sense that her goal is attainable, she is content in her pastures.  For more detail on their breeding proficiencies  – THE SECRET BEHIND THE POPULARITY OF TEXAS LONGHORN CATTLE

As for us humans, our goals are personal and unique. Different people have different playlists and not all our songs are worth sharing. All the same, singing with an orchestra adds dimension but first, one must sing… 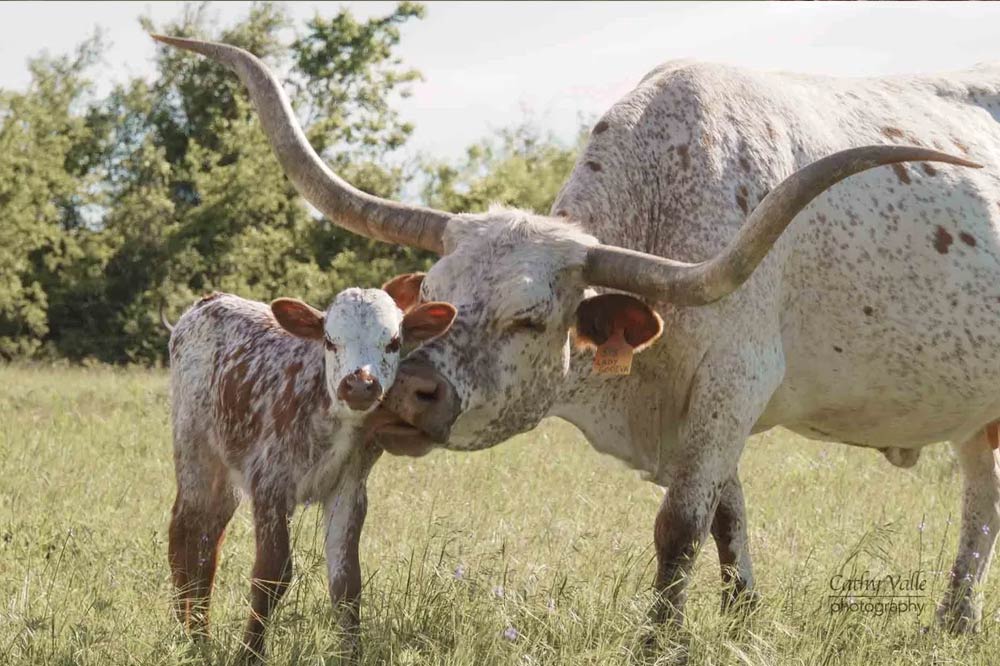 Lady Godiva and her calf are a picture of reciprocal happiness. A longhorn cow will discipline her longhorn calves but will also love them unconditionally.

3. “Good character is not formed in a week or a month. It is created little by little, day by day. Protracted and patient effort is needed to develop good character.”

Our Texas longhorn cows are dedicated to maintaining the well being of their calves. They always appear content in their purpose. Not just one day out of the year,  but day in and day out. Their love is a continuum and to watch them is to share in their joy. 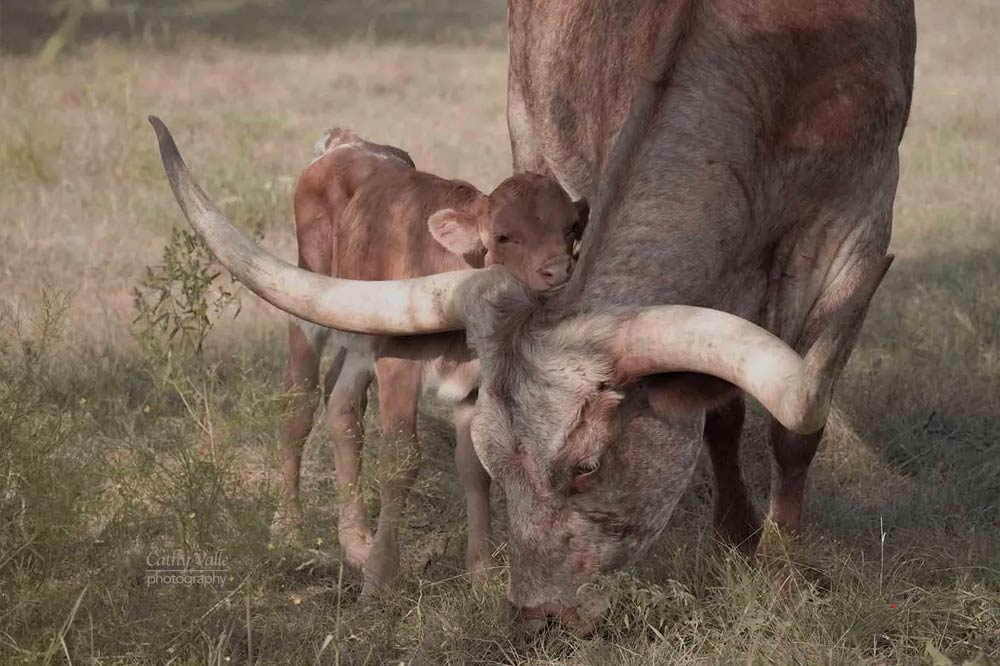 Texas longhorns are attentive to their young. Even when Dusty is eating, her calf is right besides her.

4. “Be content with what you have, rejoice in the way things are. When you realize there is nothing lacking, the whole world belongs to you.” 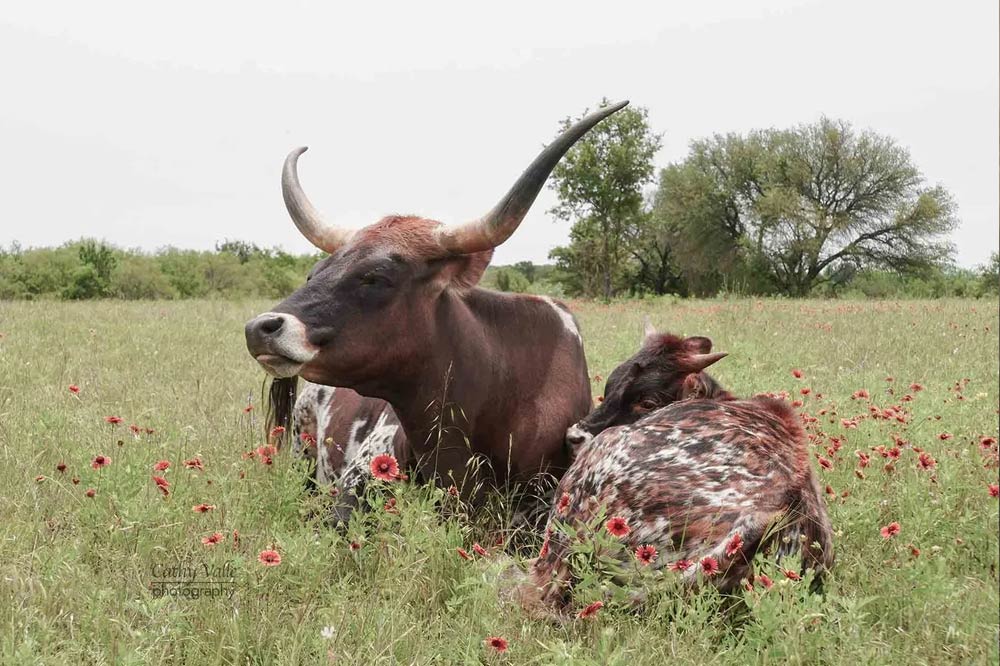 5 . “What we once enjoyed and deeply loved we can never lose, for all that we love deeply becomes a part of us.”

Memories of love and nurturing are precious. A Texas longhorn cow gives so much of herself to her calf. And yet, once the calf is weaned and her milk has dried, she returns to her old routine in her pasture. When her next calf is born, she offers the same energy and attention to her baby as she has done in the past. In our experience we also find that a calf who has spent at least 6 months with his/her mama experiences less stress and is more confident when weaned. 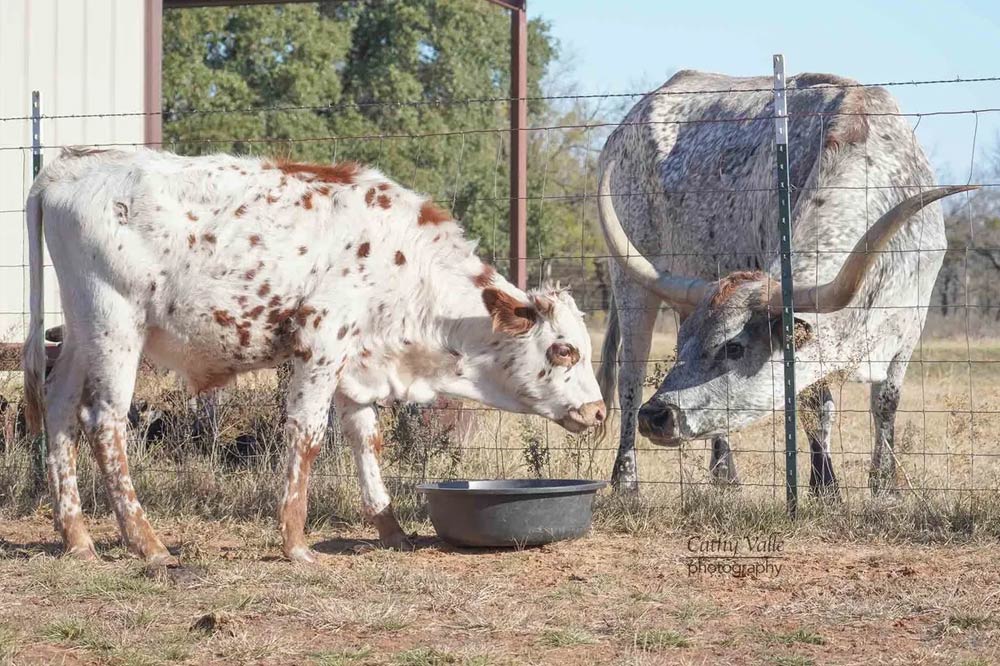 Georgie is eating out of his own bowl whilst being weaned. His mama, M Arrow Dessert Sunrise is close by and watching over his well being from the other side of the fence.

6. “Love does not dominate, it cultivates”

Texas longhorn calves are inquisitive. Their mother’s give them enough room to explore whilst giving them the support they need to grow.

True story:- Tito disappeared for about a week shortly after he was born. In that period we watched his mother Sabra throughout the day to make sense of the situation. We were sure we had lost Tito for good but Sabra had kept him hidden well. Tito joined the herd when his mother felt he was strong enough. Granted, whilst he had been alone he was probably steeping and in the same spot. As calves get older they tend to wander and spend time with other calves and appear to be very comfortable with this freedom as long as their mama’s are in earshot. 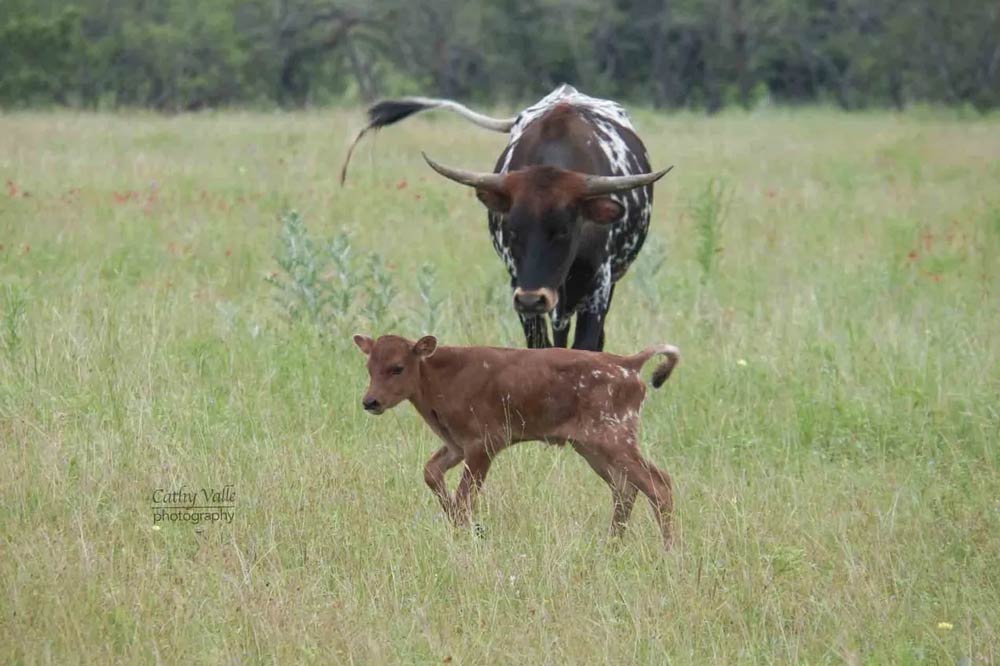 Tito running ahead playfully as his mama catches up.

7. “Love isn’t something natural. Rather, it requires discipline, concentration, patience, faith and the overcoming of narcissism. It isn’t a feeling, it is a practice.”

We have mentioned many times that Texas longhorns are great mothers but not everyone is equal. First time mothers learn what it takes to be attentive from their own mothers, their babies and from the cows around them. They make mistakes here and there but seldom make the same mistake twice. 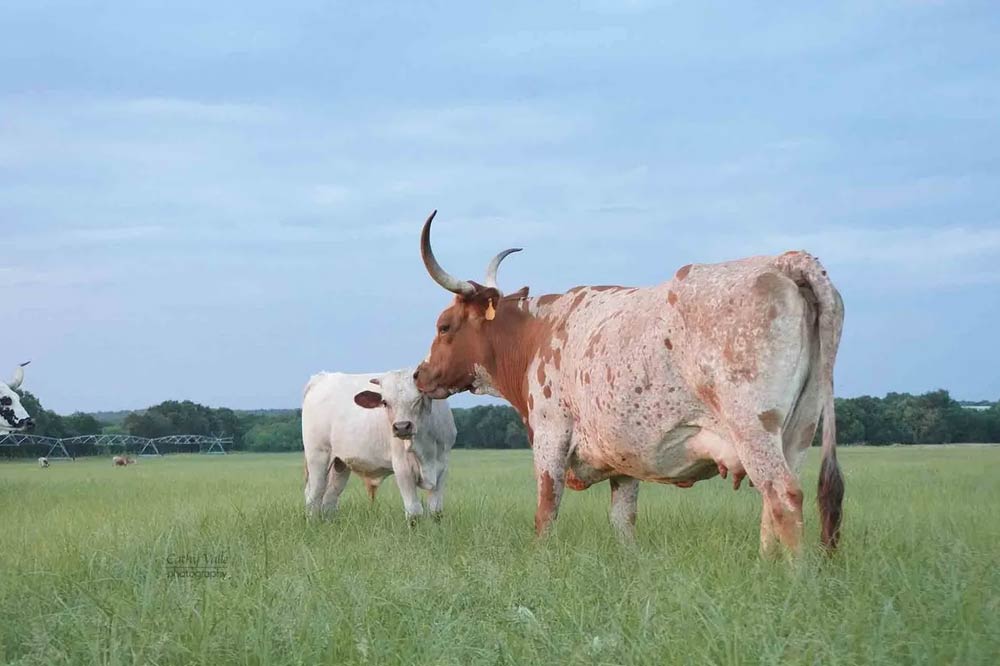 And finally, we conclude with a modern quote from Pastor Rick Warren for those of us living in the present,

8. “The most desired gift of love is not diamonds or roses or chocolate. It is focused attention.”

hmmmmm, as a proclaimed chocoholic maybe we should make an exception for the the chocolates…