100 years of Texas history with Texas longhorn cattle in Texas 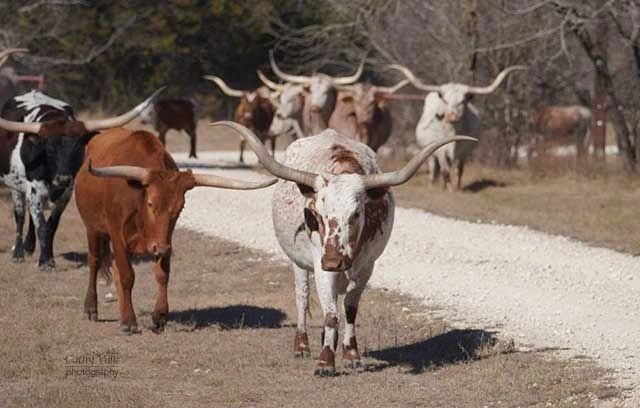 Can you imagine Texas history without Texas longhorn cattle???

There is no doubt that Texas longhorn cattle have assumed a quintessential roll in Texas history and remain a privileged and endearing icon for the State. 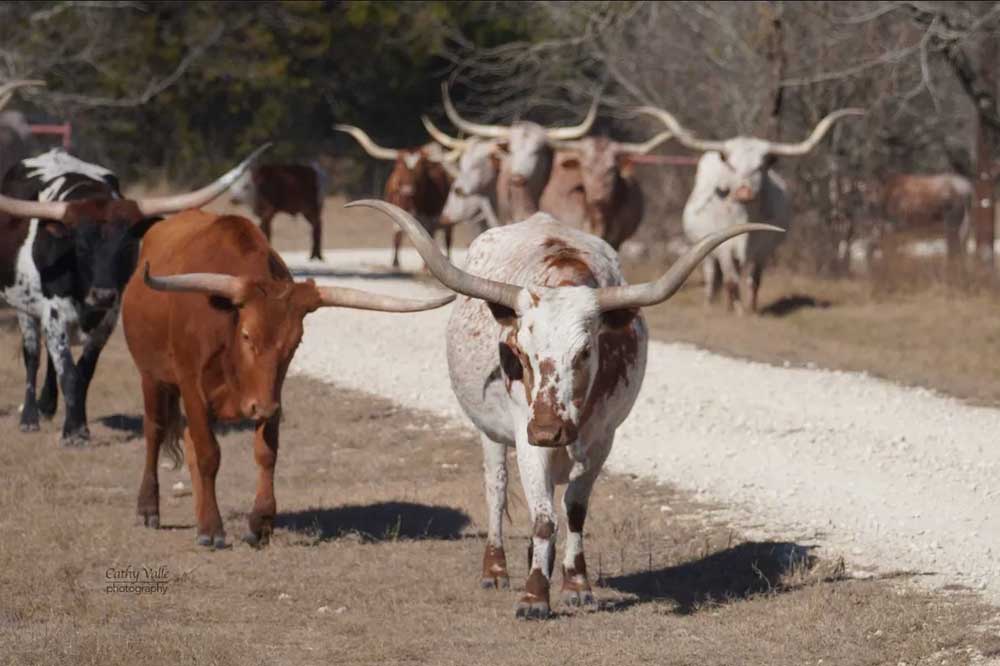 There is no one Texas longhorn that is the same. Yet Texas longhorn cattle have changed over 100 years. One noticeable change that sticks out, so to speak, relates to their horns. CLICK on this image for more details on the Texas longhorn horns – EVOLUTION | REVOLUTION

In the 1920’s the Texas longhorn breed was facing extinction- hard to believe considering that in the prior century these phenomenal animals wandered in the Texas wilds in their millions. For more on Texas history of Texas longhorn cattle – 16 Interesting facts of the Texas Longhorn Cattle Breed

A number of reasons caused these wild Texas longhorn cattle herds to dwindle in number. The invention of barbed wire and the tick influenced this decline and both are detailed in our post “Immune to a disease which played a role in depleting a breed, how?” 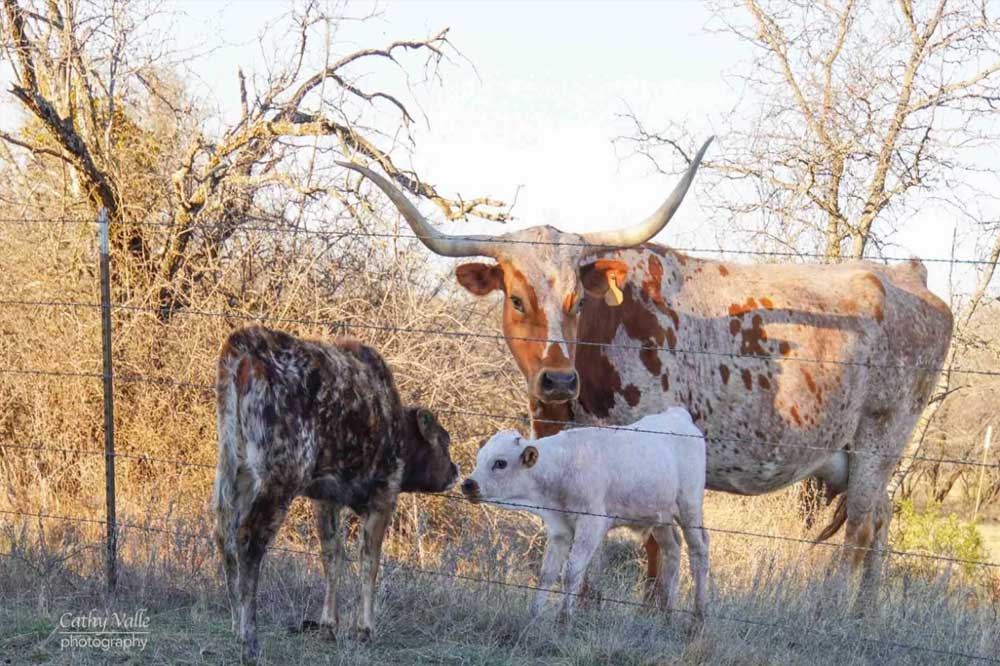 The first patent in the United States for BARBED WIRE was issued in 1867 to Lucien B. Smith. Fencing lead to a reduction of Texas longhorn cattle in the wilds. To find out more read our blog IMMUNE TO DISEASE WHICH PLAYED A ROLE IN DEPLETING A BREED, HOW?

This shocking threat of the disappearance of a ‘ICONIC TEXAS SYMBOL’ compelled the Government to take action.

Will C. Barnes, John H. Hatton and William Earl Drummond are three noteworthy names associated with having had the amazing foresight to preserve the Texas longhorn cattle breed. All three were with the Forest Services, when Barnes is said to have taken the lead in establishing this herd. He succeeded in raising funds through his networking with Sen. John B. Kendrick, a former Texas trail boss who managed to persuade Congress to fund a government herd.

In 1927 Congress set aside $3000 and assigned Barnes together with his fellow service ranger, Hatton to select a herd of the purest of Texas longhorn cattle in order to preserve the breed.Even though the herd would not be homed in Texas all these longhorns came from Texas

Barnes and Hatton inspected hundreds of cattle with longhorn characteristics throughout Texas. An article featured in the Texas Longhorn Trails on the 7 Families suggests that Barnes and Hatton ultimately selected 19 cows and 1 bull.  According to The Cattlemen ( ‘Longhorn Type Perpetuated,’ The Cattleman 14 Sept 1947) the government had selected 30 head, but within a few months one cow and one bull had died, one bull was never used for breeding as he had too much Brahman blood in him and within the first 3 years, 7 additional cows died.

Describing their horns- ‘No two sets of horns are alike……some have horns standing up in rolling spirals and others wide needle- pointed horns point straight up.’

Interestingly, none of the cattle selected for the WR Herd came from the ranches of families including *Butler, *Yates, *Marks or *Wright even though these longhorns came from the same areas within Texas where these herds were located. (*) see references below

J. Frank Dobie was one in a group of Texans who felt that Texas should also set aside land to perpetuate the Texas longhorn cattle breed.

An commendabull gesture: 1931 –  Sid Richardson, a Fort Worth oilman agreed to subsidize a Texas longhorn herd for the State of Texas

on condition that J. Frank Dobie be in charge of locating a herd which he did with the help of his friend Graves Peeler.

Graves Peeler was the foreman of Nash Ranch at the time. As he collected longhorns for Dobie, he also collected a herd for Nash Ranch and for himself. 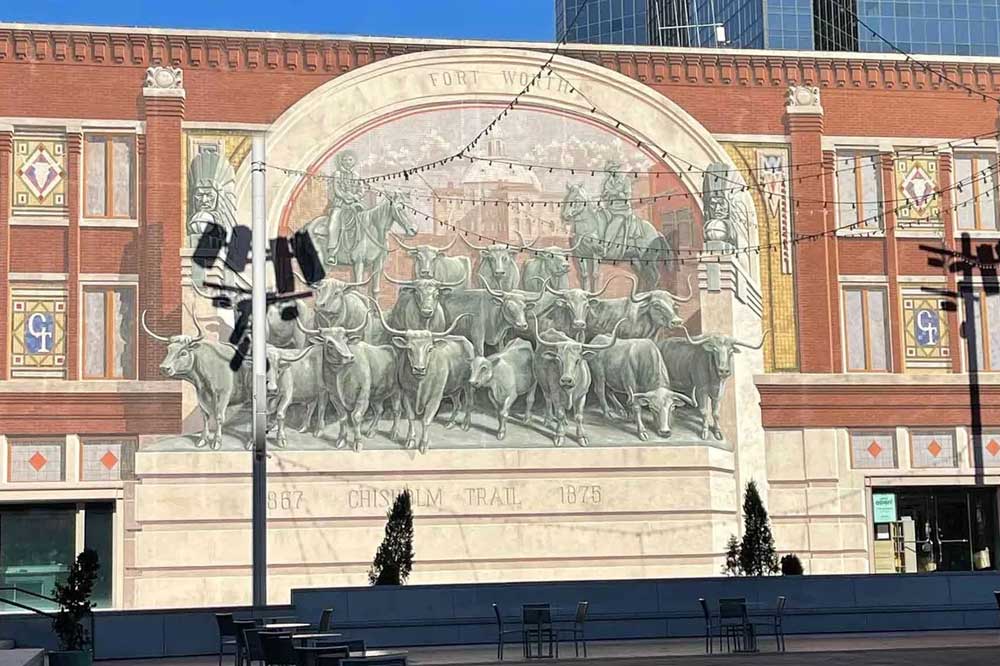 Chisholm Trail Mural at Sundance Square in Fort Worth illustrates how Texas longhorn cattle looked on the cattle trails. Their curly horns and bony frames similar to how they looked in the 1920’s. For other fun Texas Longhorn Cattle sites to visit in Texas

19 Fun ideas with Texas Longhorn cattle: during COVID and beyond

By this time the state herds were thriving enough to stock a small breeding herd for Fort Niobrara Wildlife Preserve in Nebraska and also to auction breeding stock to private ranchers and longtime longhorn enth’ooo’siasts.

From 1943 Texas longhorn lovers and cattlemen would assemble once a year at the longhorn surplus sale at Wichita Mountains Wildlife Refuge.

1948: – Fort Griffin State Historic Site was selected as the official home of the State herd of Texas longhorn cattle 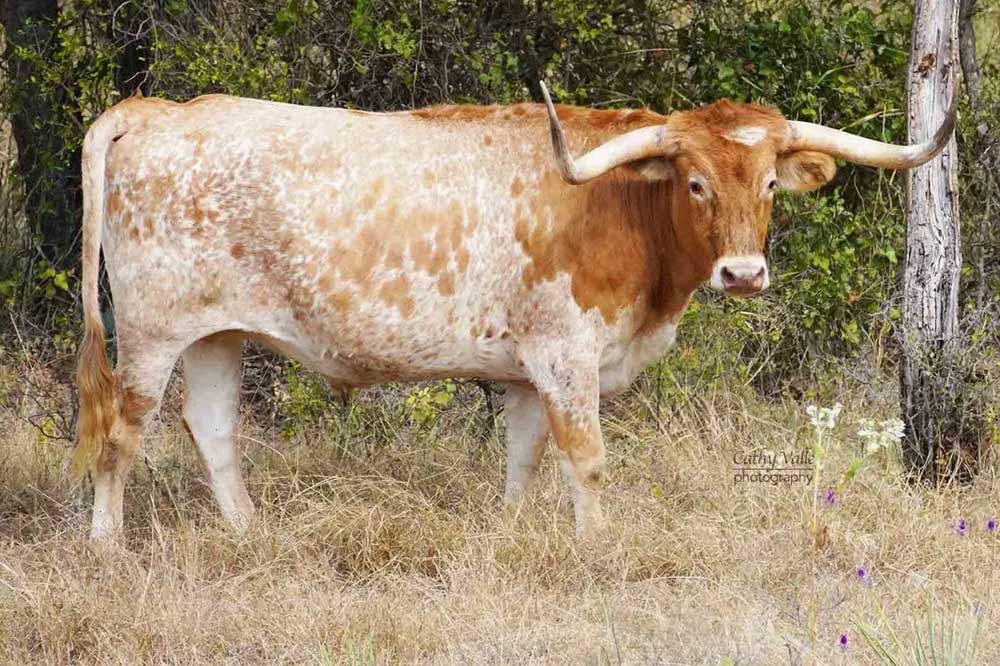 At this time the original WR longhorn herd had been increased by 17 cows and 22 bulls, 9 of which were obtained through trade with *Cap Yates.

An office was established in Texas and the first meeting was held.

Calamity Louise lived for over 20 years, the majority of which were spent at GVR longhorns. Her heifer, Lady Godiva is in the following photo. Aunty Louise, as we affectionately called her had strong ties to Schreiner’s III herd and YO Ranch. Her sire was YO Houston Class. She had YO Houston Classic, YO Linda and YO Calamity Jane in her lineage. She was an excellent mother as are most Texas longhorn cattle. A strong maternal instinct is one characteristic of longhorns that stands out. Click on the photo to find out another reason behind the popularity of Texas longhorn cattle.

On the 10th anniversary of the TLBAA, the organization had grown to 350 members and 7000 Texas longhorn cattle

As of June 30, 1975, the only progeny eligible for registration were those of registered Texas Longhorns. 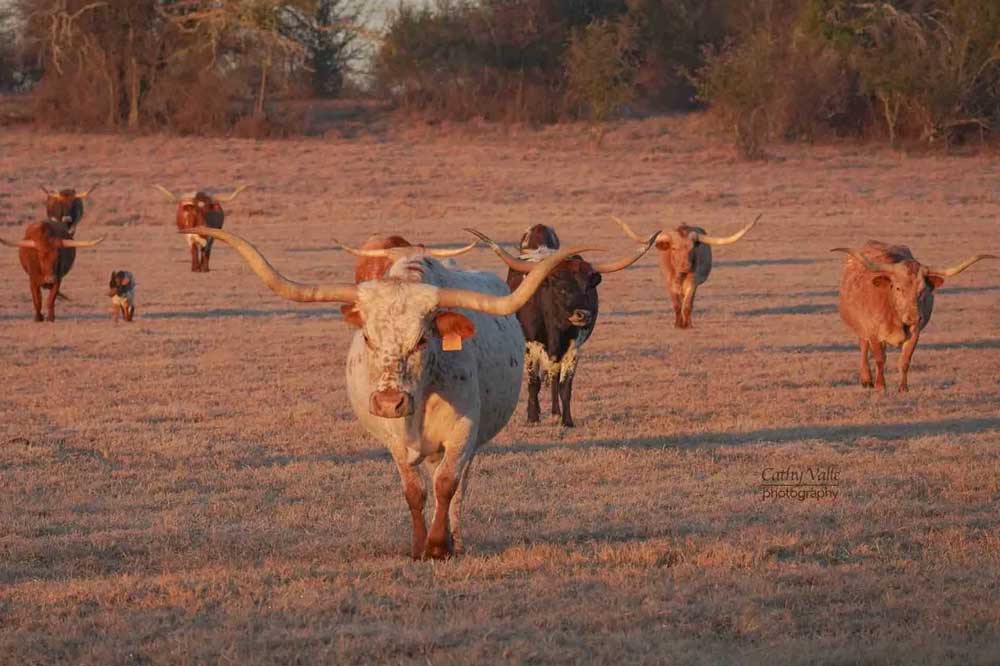 TO OUR SALEBARN AT GVR LONGHORNS

TLBAA membership reached 2500 members in the early eighties and over 45 000 longhorns had been registered. 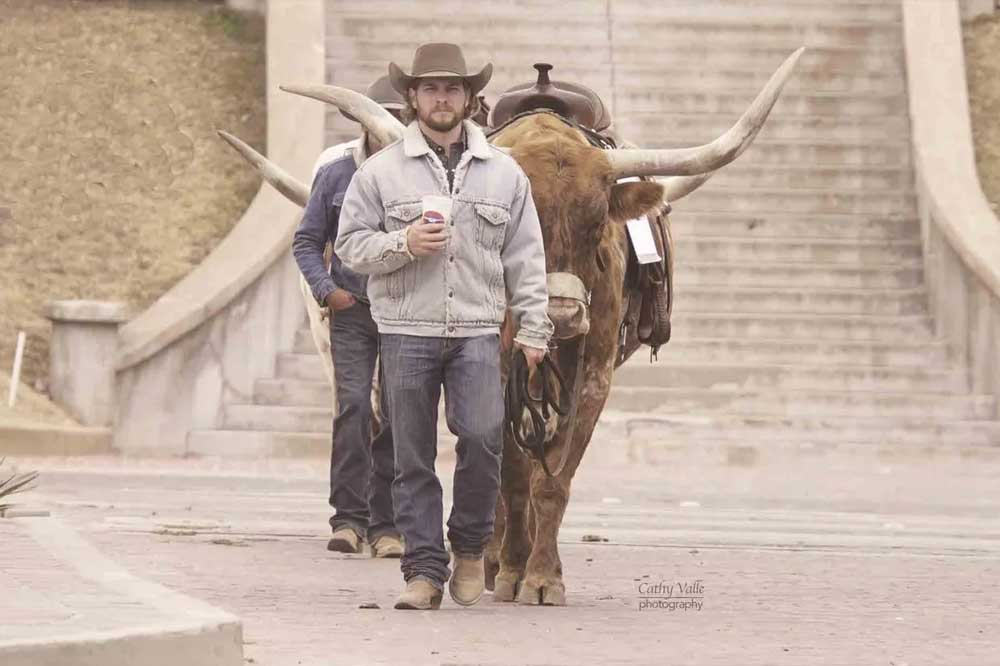 ” I’ve heard people say that the cattle industry made Fort Worth, but I am inclined to believe that Fort Worth had a lot to do with making a cattle industry in Texas.” J.S. Bridwell ( quote from the Stockyards Museum). JW, Stockyard wrangler leads Patron a sweet riding longhorn steer into an always bustling Main Street of Stockyard Station in Fort Worth.

In 1989 the International Texas Longhorn Association (ITLA) was formed and held its first meeting.

High purchase prices pointed to a growing interest  in Texas longhorn cattle, not only for their innate hardiness to endure the elements but as commercial beef as well.

1982: –  Texas Ranger J.P. frozen semen collections were syndicated by the Texas Ranger Memorial Semen Syndicate for $1.5M at $15000 a share.

Texas Ranger J.P. was born in 1968 and his horns measured just under 50″ His fame perpetuates as his genetics continue to show up in the pedigree of every Grand Champion longhorn bull to this day. 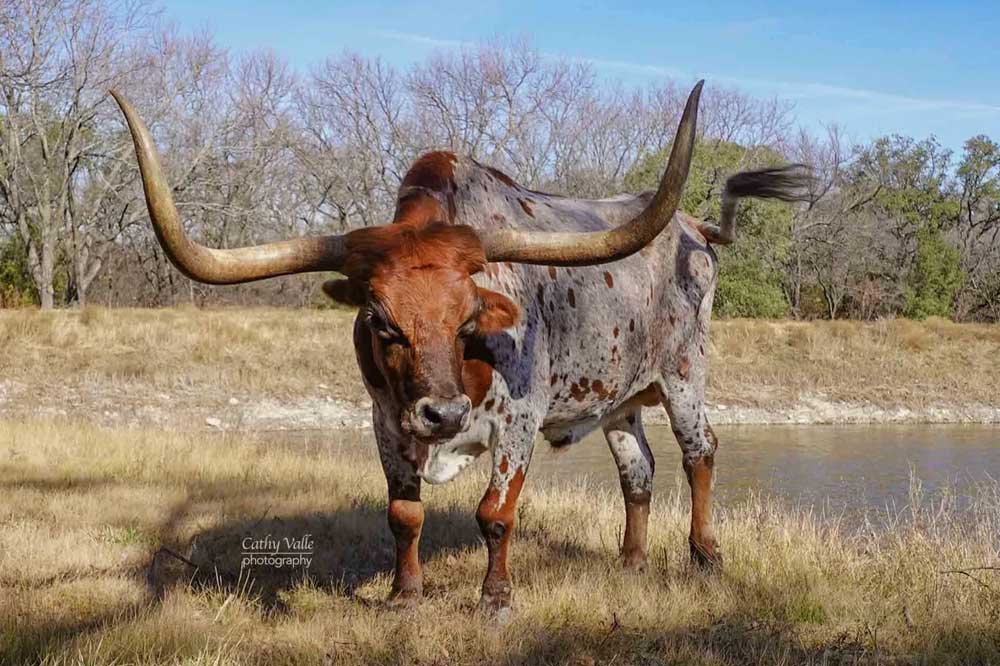 Our big bodied Texas longhorn steer MOONSHINE, at GVR longhorns. As you can see, we did not raise him for beef but we did write a blog on the question ‘Can you eat the Texas Longhorn Cattle you raise?’

2005: –  the CTLR formed the CTLConservancy “engaging in scientific research and education about old-time, original Texas Longhorn cattle” and “the original CTLR Texas Longhorn is now on the Livestock Conservancy’s List of 150 Critically Endangered Heritage Breeds.” www.ctlc.org

Like all commodities over the last twenty years, Texas longhorn prices have had their ups and downs, and just like a pend’oo’lum swings from one extreme to the other, so have prices. The trend for high prices at auction over the last two decades has favored the widest horns. Two of the highest prices paid for the widest TTT measurements were both in 2017.

2021 – Although more auctions are held these days than in the past, according to TLBAA, total auction sales for 2021 were close to $4.5M. 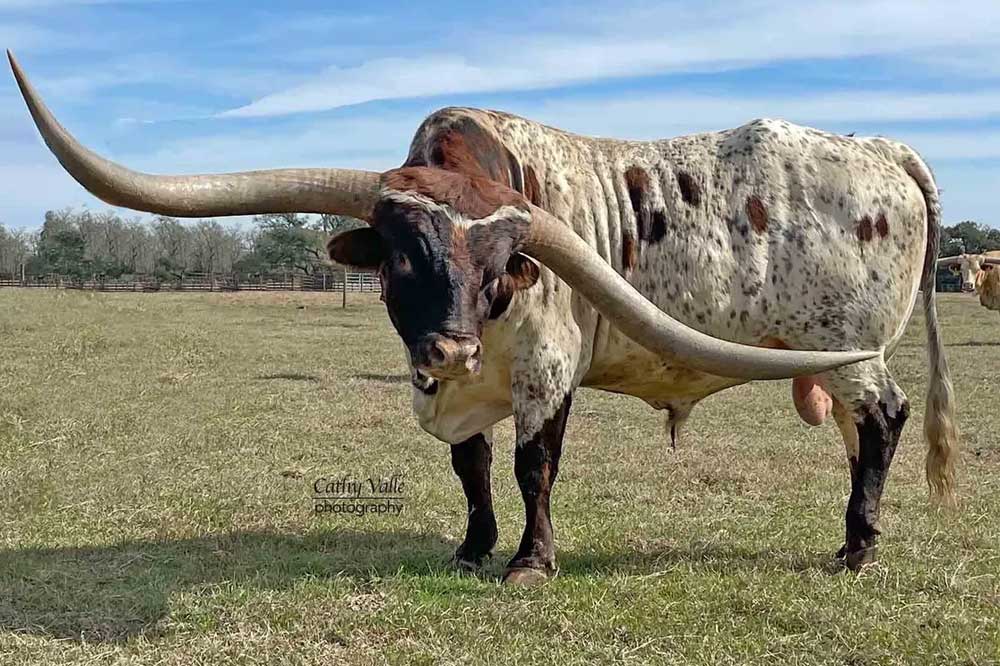 Texas longhorn horns – evolution, revolution. For additional info on how longhorn horns have changed, click on this picture of Cowboy Tuff Chex. He is currently the widest horned bull in history. This photo was taken with permission from Bentwood Ranch.

MINDBLOWING!!! Currently the TLBAA has close to 4000 active members with total registry of just over 500 000 Texas Longhorns

For additional advantages of the Texas longhorn breed follow this LINK

The genetic pool of our modern day Texas longhorn cattle can be traced back to * 7 foundation families. the WR herd being one and the other 6 listed above with an asterisk (*) in front of their names. All 7 “families” represented longhorn herds with different characteristics depending on their personal preferences and specific climatic and environmental conditions. ( additional links and more info on the families can be found HERE) The different herds were all Texas longhorns in a ‘pure’ form. Some characteristics were consistent but a few specifications differed from one herd to the other. Whether or not the original families would have agreed on the perfect specification for a Texas longhorn today remains unanswered.

Presently, across the board, Texas longhorn cattle have changed dramatically over the last 100 years. Body conformations are considerably different and horn structures and shape are wider and longer than ever before.

How much do Texas longhorn Cattle cost?

14 Gestures of Love and Affections the Texas Longhorn Way

Worcester, Don. The Texas Longhorn, Relic of the past asset for the future. College Station: Texas A&M University Press, 1987.

Disclaimer: All material noted above is based on our hands- on experience as ranchers, as well as our observations of our own cattle over the years. We have done and continue to do extensive research in order to maintain our herd‘s optimum health. However, all opinions and statements made on our website are meant as guidelines only. We are not qualified statisticians/ veterinarians and urge you to consult a specialist with your concerns. Content and of this blog and all pictures belong to GVR Longhorns LLC and may not be copied in any form. ©GVRlonghorns.com All rights reserved.