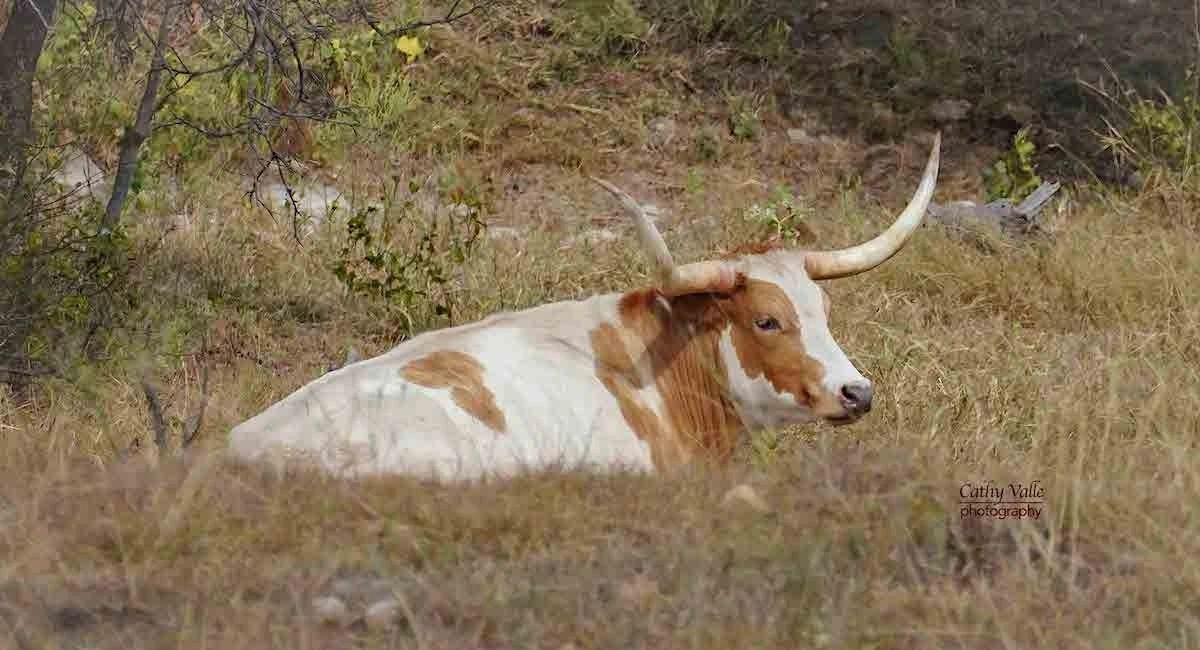 Well, I finally took my own advice!!
(don’t miss our restaurant recommendation down below)

I followed up on my own idea, lol. Remember this blog post?

19 Fun Ideas with Texas Longhorn Cattle in Texas, during COVID

As a reminder here is “Idea Number 10……”
A day trip in the country in search of Texas longhorn cattle can be so much fun.

I went on to write,

“A portion of the official Texas longhorn herd of Texas is at Fort Griffin State HIstoric Site. ……

……Just getting out and changing your daily visuals helps uplift your perspective.”

So, in need of some upliftment and good company, I asked a friend to join me and earlier this week we ventured out on a day trip to Fort Griffin State Historic Site

Our drive took us through some beautiful countryside and a few quaint Texas towns. The route we took was pretty straight forward and the roads not at all busy and quite pleasant to drive. Eric explained to us that the Texas Longhorn herd at Fort Griffin is the official State of Texas Longhorn herd designated as such by Texas legislature in 1969. The full herd consists of around 250 Texas longhorns. Portions of this herd stay at other State Parks, namely San Angelo State park, Copper Breaks State Park, Palo Duro Canon State Park. Fort Griffin itself has around 40 to 50 Texas longhorns at any one time. The official state herd is managed by the Texas Historical Commission as well as the Texas Parks and wildlife Department.

For optimum herd health, Will Cradduck, the manager of the Official State of Texas Longhorn herd at Fort Griffin works with breeders subscribed to the Cattlemen’s Texas Longhorn Registry. To maintain the herd size, Texas longhorns are offered for sale from time to time. Anyone who is familiar with the Fort Griffin Fandangle may recognize the Texas longhorn steer mount in the picture below. Holiday, together with his buddy Showdown, led the longhorn Steers as they participated and fulfilled their roll in the Fort Griffin Fandangle. Both longhorn steers led a long life and are no longer with us but the show goes on.

Fort Griffin Fandangle. On the two last weekends in June every year, the folks of Albany, Texas present a show and re-enactment of the Texas frontier story NEVER without the official state of Texas longhorn cattle herd. If you value all things Texas, Texas history and Texan tradition, you will appreciate this opportunity to view an iconic Texas longhorn cattle herd amongst the ruins and restored buildings of yesteryear.

The Town of Albany, Texas

Fort Griffin was an important location throughout Texas history as a stop along the Great Western Cattle Trail as well as a support post. Although the Fort was abandoned as a defense post in 1881, the town of Albany remains relevant and full of surprises.

Here are a couple of pleasant surprises we had time to visit. No doubt a return visit is on the cards.

Fort Griffin General Merchandise Co. & The Beehive Restaurant in Albany, Texas has an unassuming appearance from the road but don’t be fooled!

My friend suggested we stop here for lunch and after having had the very best chicken fried chicken I have ever eaten, I would suggest that everyone should stop here for a meal too. You will be in good company. Tommy Lee Jones, Clint Eastwood and Robert Duvall to name just a few famous names have enjoyed meals here. Don’t take my word for it, Texas Monthly named The Beehive Restaurant ” The Best Country Steakhouse in Texas.” The Old Jail Art Center in Albany Texas is as it sounds, a jail structure transformed into an art museum. The art is astounding, ranging from ancient artifacts to contemporary art with European masters like Picasso, Renoir and Modigliani showcased in between. There is a library and archives open to the public too. For more info www.theojac.org as an added bonus….

We drove through Cisco and passed the building that was developed into the first HIlton Hotel. And – back to Texas Longhorns

Our Sabra, pictured below reminds us of the Texas longhorns at Fort Griffin. Her genetic makeup is not influenced as strongly by modern day breeding.

Original characteristics that set old school genetics apart from the modern influences include some of the following features,

A mature Texas longhorn is easier to tell apart. Modern bred Texas longhorn cattle weigh more than they did in the past and modern trends measure horn growth from one tip to the other. Modern breeding programs are designed to optimize this growth. These days it’s more common to find Texas longhorns with flatter, straighter and longer horns than the originals. Twisty horns are increasingly difficult to come by. The Cattlemen Texas Longhorn Registry is concerned that these modern changes in appearance are an indication of changes across the board affecting all characteristics that set Texas longhorn cattle apart from other breeds.

Which way do you moo on the subject? please let us know. Thank you for spending time on our blog. Your voooows matter – please send us your feedback.