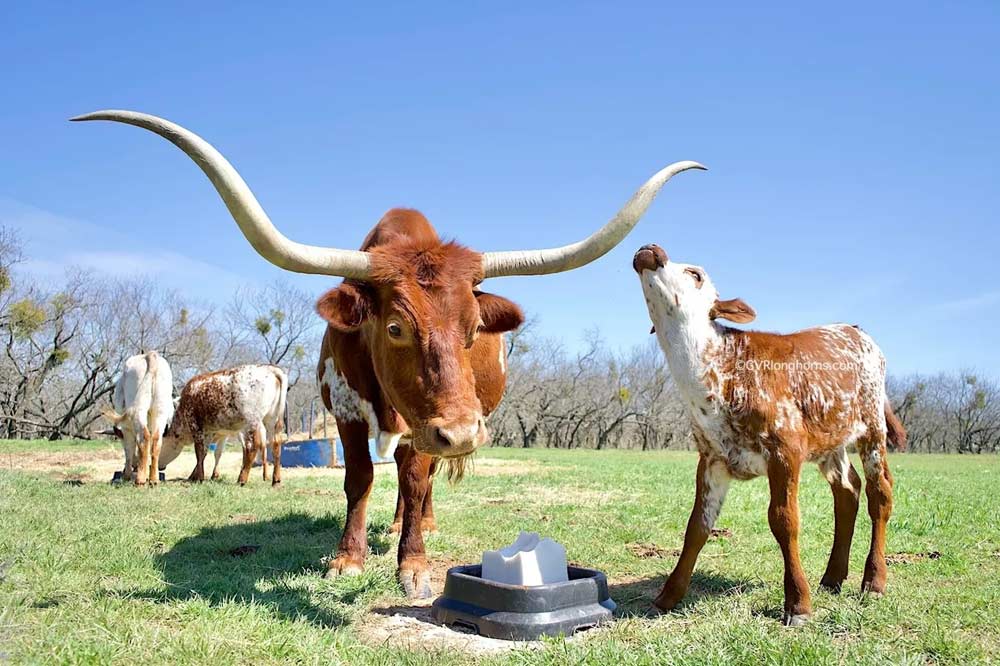 An overview of the fascinating fascination of Texas longhorn horns, whilst pointing out some factors to consider.

Many of us are attracted to the Texas longhorn breed because of their historic connection to Texas, cattle drives, the wild west, cowboys and the likes. However these days, the memories of yesteryear are often overshadowed by how wide longhorn horns can grow. Competition is in our human DNA, so when it comes to ranching with Texas longhorns it stands to reason that longhorn owners strive to acquire the very best genetics their money can afford. It is therefore not surprising that the concept of outstanding genetics is more often interconnected with longhorns raised with increasingly wider horn spreads.

As a result, the aesthetics of the modern Texas longhorns’ horns has changed dramatically. More and more Texas longhorns look different to how they did over a hundred years ago and their horn measurements from one tip to the other have more than doubled if not tripled in less time.

Cowboy Tuff Chex holds the Guinness World Record for the longest horned bull. Similarly, we would be remiss not to include the longest total horned Texas longhorn cow, M Arrow Cha-Ching also owned by Richard and Jeanne Filip of Bentwood Ranch. Her horns are impressively long. Even so, they remain notably feminine and slender at the base of the skull from which they grow.

As more and more cattle ranchers are attracted to the Texas longhorn breed and as more money is spent in the industry, more changes within the breed are prevalent.

Nonetheless, the fascination with huge horns is not new.

Dobie goes on to cite many a story, not unlike “the inspiring fishing tale” of huge spreads that many saw ‘with their own eyes’.  Perhaps the most famous story is that of Champion, a long horned Texas longhorn steer that Dobie’s uncle bought in 1892 for $12.

He consequently entered Champion into an “International Fair” in San Antonio in 1899 which in turn triggered considerable media attention.

What is intriguing in this story, is not the length of Champion’s horn spread, as an official measurement seems to have evaded record.  Interestingly, though, Dobie explains the intentions of Will Eidson, a South Texas cowboy who tried to capitalize on the sensation that huge horns would draw.

Will Eidson had high hopes of making, “a mint of money” out of Old Champion, alas, to no avail.

There is no doubt that much of the value in Texas longhorn cattle today is determined by an ever increasing tip to tip measurement (TTT). Many of these longhorn cattle are bought and sold for thousands of dollars. Cattle ranchers often enter the industry with this ambition in mind and so modern day genetics are so much easier to find than in the past. Nonetheless, it is also true that thousands of longhorns, even with these modern genetics, do not make the cut. Perhaps because of our competitive nature and an ambition to own sensational Texas longhorn cattle, many beautiful longhorns may be overlooked because of their lack of potential to gain horn length at an early age.

If you are captivated by the Texas longhorn cattle breed and the twists, the turns and the historic shapes of Texas longhorns’ horns, you may be interested to learn that their character often takes time to mature.

At Green Valley Ranch, we love how our Texas longhorns’ horns twist and turn. We feel strongly that in order for a herd to be happy, its owners need to be happy with them too. Like many trusted Registered Texas longhorn breeders, we evaluate our longhorns against a number of criteria and we always advocate to buy animals you like to look at in your pastures. See our previous Blog post, Where is the Value in Texas Longhorn Cattle – 5 Considerations

Here is a series of photographs to illustrate some considerations in the evolution of Texas longhorn horns within our herd. These photos were taken of our cattle’s horn development over time.

A few of the photos are old – we apologize for their quality ahead of time.

Most Texas longhorn breeders will agree that all generic characteristics should be considered when choosing Texas longhorn cattle. Within that context, and with your preference in mind as to how a mature Texas longhorn should look, there are a number of factors that play a role in horn development.

It is well documented in the Texas longhorn industry that an animal’s pedigree over time and the dynamics of the genetics chosen will influence an animal’s various  characteristics including, to an extent,  the formation of their horns. It’s satisfying to watch how  the longhorns you love develop and influence their progeny from one year to the next.

(How to measure horns – HERE)

Calamity Louise was one of our first foundation herd cows. Her sire was bred by Charles Schreiner III, the founding member of the TLBAA (Texas Longhorn Breeders Association of America). She lived with us for most of her life until she passed away in December 2020, just shy of her 22nd birthday.

Calamity Louise was bred to JL Baracade and had a daughter in 2008 who we named Lady Godiva.

‘Patience is the key element of success’ – Bill Gates

A Texas longhorn’s horns grow faster in the first few years of life and then slow down in growth. They can however, continue growing for longer than you may think.  How much horn growth slows down does vary between the sexes and from one animal to the next. In 1999, Malcolm Goodman published an article in the Texas Longhorn Journal Predicting Future Horn Growth. ( read it here )  Jasmine Blossom has a tight twist to her horns and their growth is illustrated this series of photos over time.

Although hereditary traits influence how horns grow, these genetics do not fully guarantee how longhorn’s horns will mature. For example, generations of cows with longer horns may be more predicable in producing offspring with long horns. However, as is the case with other qualitative genetics, horn growth is influenced by environmental factors too. 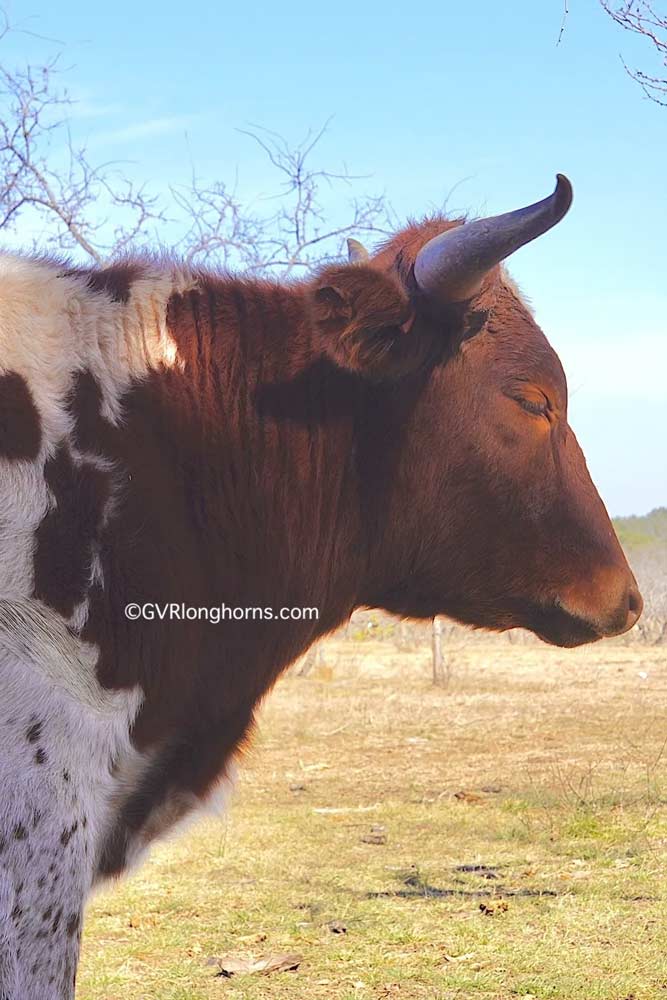 In order to contend for the widest horn set on a Texas longhorn, horns that grow laterally and as straight as possible have a better chance of competing in the horn showcases successfully. If you are set on striving for the win, you may be interested to know that the current widest horn measurement for a Texas longhorn steer measures over 11 feet.   Pictured below is Valentino, AKA Tino – he is currently helping his cattle ranching family who train cutting horses. 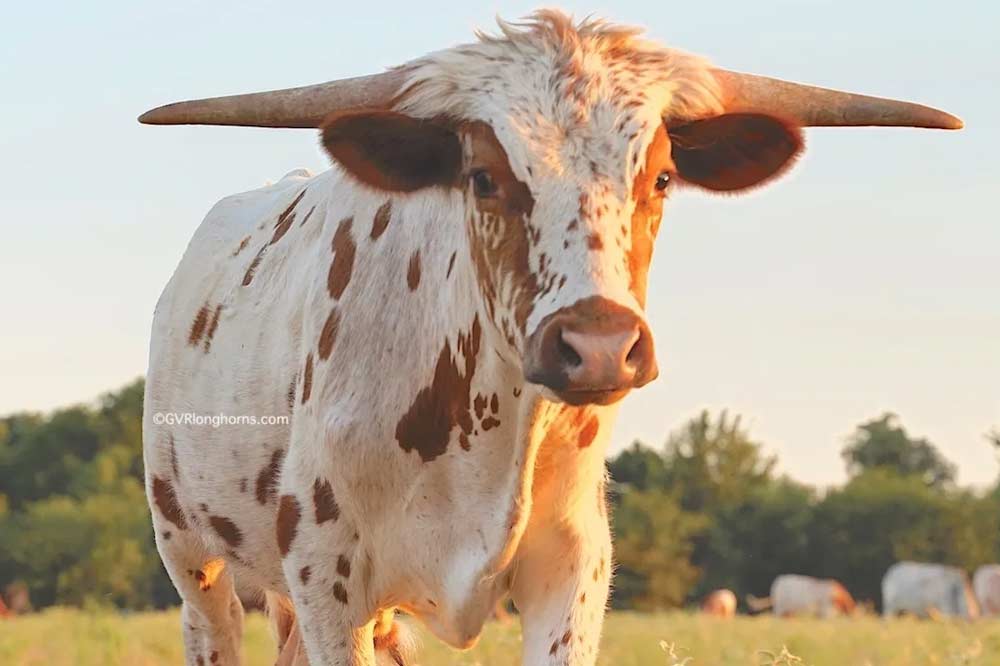 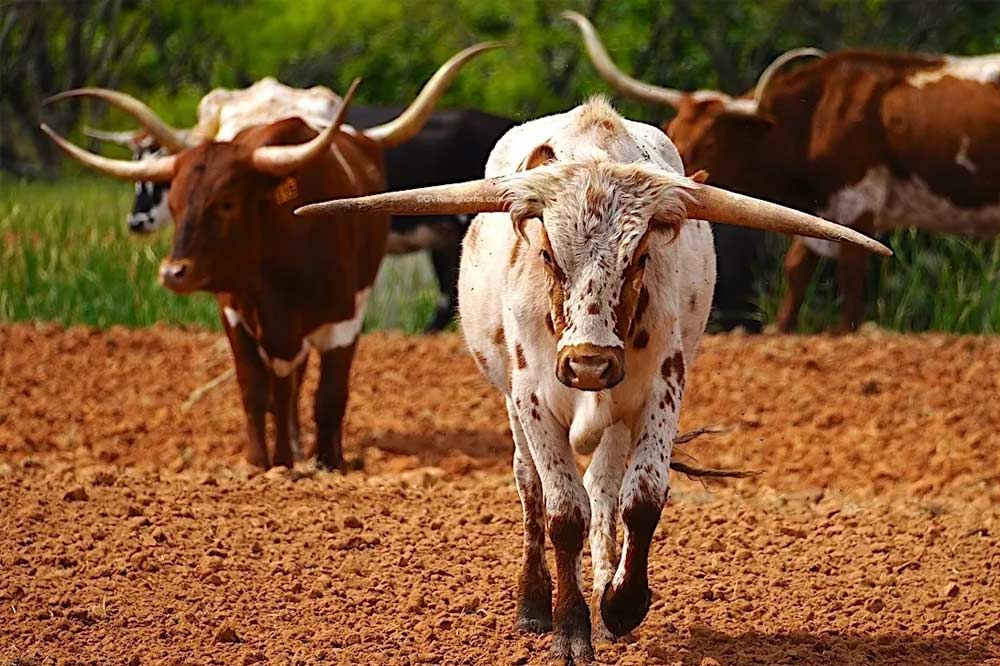 The horns of Texas longhorns take so many shapes, forms and dimensions.

Within this realm there are countless choices one can make in choosing your ideal Texas longhorn.

There is no doubt that this variety contributes to making Texas longhorn cattle so interesting and  desirable to own. A preference on horn type is just one variable amongst many which also include –  color, disposition, proportion, size  and stature.

For additional reading on how special Texas longhorn cattle are to us: